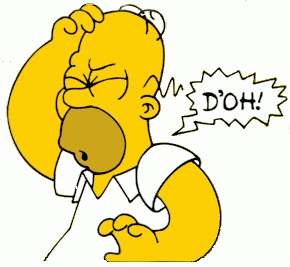 Hey, I’ve missed this. I’ve been participating in real life and I still am but I miss this and I miss you. I don’t know how long I’ll be here but… Let’s have a good run.

So, you made a mistake. Now, you are thinking what an absolute douche bag you are. I mean, what could be worse than making that particular mistake on that particular day? So, you consider yourself a loser, that your social life or in fact, your actual life is over. Truth is, depending on the size of the mistake that may actually be true. But, for the most times, it isn’t. that mistake you made is just another needle in a stack of needles — nothing out of the ordinary.

Last week was Passion Sunday and the passion narrative showed two big idiots who betrayed Jesus. one, for financial reasons. I’ll say he was smarter because he literally sold out his friend. The other, well, could have avoided the betrayal and ran away like the rest of the twelve but he lingered to prove his bravery. Looking back, don’t you think he’ll consider himself a fool. But, what’s that? Prophesies had to be fulfilled.

Now the issue isn’t that they made mistakes. The issue is how they behaved after the mistake. Judas Iscariot sold Jesus to the Pharisees and the rest of the big boy’s club for twenty pieces of silver. I’d have asked for gold. Now, a lot of us behave like Judas. We make mistakes and when it blows in our faces, we condemn ourselves to death by hanging. We think we’re the worst human beings to ever walk this earth. We can’t imagine anything worse than what we’ve done. Well, look back a few years and think of how many times those exact thoughts have crossed your mind. Do you see how those consequences seem insignificant when compared to today?

Now, let’s turn to Peter. Peter ran along with the captors and camped with them. He was very chivalrous, this Peter. Today, in Hollywood, he’ll probably work for MI6 or the CIA. Then, in trying to be the knight, he made his own mistake. Unlike Judas, Peter realised his mistake. Peter cried because he’d done something wrong, but you know what Peter didn’t do? He didn’t hang himself. For whatever reason, he knew that his time hadn’t come. In the long run, he died but his death meant more by then.

Many of us make mistakes that are slight or grave and we won’t forgive ourselves for it. We replay those incidents over and again in our minds and each time they take on deeper gravity because somehow our minds have been programmed to add to the old wounds salt of the new ones. Sometimes, we aren’t even the ones who’d done wrong but we are the ones who live with the consequences. Among other reasons, one is probably because we have chosen not to forgive and let go of those experiences and people that have caused us pain.

There is an Igbo saying, “onye ji mmadu ji onwe ya”. In English, a very loose and largely imaginative translation would be something like, “if you refuse to let go of someone you’ve pinned to the floor, you yourself can’t rise.” This past week, we’ve been reminded of God’s mercy and His choice to let us go, out of the shackles of our own betrayal of trust which we committed through our first parents. It’s our turn now to forgive ourselves and then to extend that forgiveness to others who have caused us harm. Obviously, for a lot of people, there’ll be need for a lot of therapy but it is a good way to start.

Happy Easter folks. Until next time, this is Cruise Control and I am Oloye Emeka, saying, life na cruise; catch am.

This also has an audio version. Click here to listen